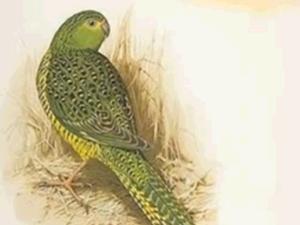 SYDNEY - An intrepid Australian bird-spotter has captured the best evidence in a century of a live "night parrot", a rare creature that ranks among the world's most enigmatic avian species, scientists said Thursday.

John Young, a naturalist photographer, presented photos and video of the small, yellowish-green parrot to experts at the Queensland Museum this week which government scientist Leo Joseph said "make it seem very clear that he's found the bird".

Researchers feared for decades that the nocturnal, desert-dwelling parrot was extinct, with no sightings between 1912 and 1979 and only a handful since, prompting the Smithsonian Magazine in 2012 to list it at number one among the world's five most mysterious birds.

The last live specimen was captured 100 years ago and though two dead birds have been found, in 1990 and 2006, no one has been able to offer definitive proof of a live sighting until now.

It is listed as endangered by the International Union for the Conservation of Nature, which lists the parrot as having been "rediscovered" in 2005, when two biologists spotted the elusive bird but were unable to photograph it or collect samples.

There are only about 50-250 night parrots in the wild, according to estimates cited by the IUCN.

"No one's been able to go that extra step and find a live one and find it repeatedly, that's been one of the big stumbling blocks with night parrots," said Joseph, director of the Australian National Wildlife Collection at government science agency CSIRO.

"It's huge (news) in the ornithological world."

Most of what is known about the species -- called "Pezoporus occidentalis" -- has been gleaned from 25 specimens, largely captured during the 1870s in South Australia's Gawler Ranges. They are now scattered across the world's institutions.

Joseph said it was a "genuinely rare" species that appeared to have dwindled in numbers due to grazing and feral animals towards the end of the 19th century.

"This aura of myth and intrigue grew up around it," the scientist told AFP.

"We can't sort of progress any further until we find the birds and hang onto them."

Young, who advertises himself as "The Wild Detective", is keeping the nesting site in Queensland's remote Lake Eyre basin a secret, refusing to share it even with CSIRO or hand over his recordings of its song.

He had invested "enormous amounts of time" in tracking the secretive bird and was now seeking private funding to continue his surveillance and conservation work, Joseph said.

Presenting his findings in Queensland on Wednesday, Young said he would "rather go to jail than tell anyone where I found it", according to media reports of his invitation-only talk.

"The last thing I want to see is hundreds of people out there with night lights," he said. — Agence France-Presse