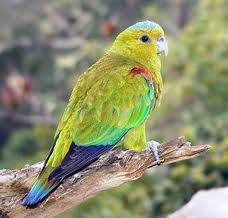 These organizations joined forces to acquire about 356 acres of land to double the size of the existing Giles-Fuertesi Nature Reserve. The reserve is managed by ProAves, ABC’s Colombian partner and the leading conservation organization in that country.

With fewer than 250 individuals thought to exist, the beautifully colored Fuertes's Parrot is one of the world’s rarest birds. Also known as the Indigo-winged Parrot, it was thought to be extinct for 90 years, but was rediscovered in 2002 when ProAves biologists, funded by an ABC grant, discovered a small population of about a dozen individuals living in fragmented and unprotected high-Andean cloud forests at the site of this reserve. The Fuertes’s sole breeding habitat remains a 19-square-mile area.

“The Fuertes’s Parrot is endemic to Colombia and exists only in the wild at two sites where it bizarrely depends on epiphytic mistletoe fruits,” said Lina Daza, Executive Director of FundaciónProAves, “so with our partners support to secure private lands for its conservation, we have ensured a new and important lease of life to this wonderful parrot and a major step away from the abyss of extinction.”

“With one of the world’s largest discoveries of gold recently uncovered by AngloGold Ashanti just miles from this key population of the Fuertes’s Parrot and with the risk of deforestation sharply rising, we were able to quickly respond to the urgent request of our Colombian partner and assist them in buying and permanently protecting this critical site.” said Dr. Paul Salaman, CEO of World Land Trust-US.

“Saving one of the world’s most endangered birds has required an intensive, decade-long effort and funding an on-the-ground organization like ProAves that delivers concrete conservation results clearly has paid great dividends. This is certainly one of the more gratifying efforts in which we have been a part,” said Dr. George Fenwick, President of ABC.

Since the Fuertes’s Parrot was rediscovered, ABC, ProAves, and WLT have worked hard to protect its tiny range. In 2004, ProAves conducted a pilot nest box project that was a huge success thanks to the support of Loro Parque Fundación. By early 2005, 23 pairs of the parrots were nesting in these boxes--all successfully raising broods. In 2009, the Giles-Fuertesi Reserve was established, and now protects roughly one fifth of the global population of the Fuertes’s Parrot.

ProAves and other conservation groups have established a series of reserves known collectively as the Threatened Parrot Corridor, which includes one municipal and three private reserves, all managed by ProAves. With the new additions, these reserves conserve over 18,000 acres of key habitat, and protect approximately 70% of the Fuertes's Parrot population, as well as populations of four other species of imperiled parrots: the Yellow-eared Parrot, Rusty-faced Parrot, the Golden-plumed Parakeet, and the Rufous-fronted Parakeet.

The main threat to the parrots comes from forests containing key nesting sites being logged and cleared for farming, cattle ranching and mining.

American Bird Conservancy (ABC) is a 501(c)(3) not-for-profit membership organization whose mission is to conserve native birds and their habitats throughout the Americas. ABC acts by safeguarding the rarest species, conserving and restoring habitats, and reducing threats, while building capacity in the bird conservation movement.


ProAves is a Colombian NGO dedicated to the conservation of birds and their habitats through research, outreach and direct conservation actions in collaboration with local communities.


The World Land Trust is an international conservation organization with offices in the UK and US that takes direct action to save rainforest and other wildlife habitats. WLT and its overseas project partners have been instrumental in the purchase and protection of over two million acres, now protected as permanent wildlife reserves.