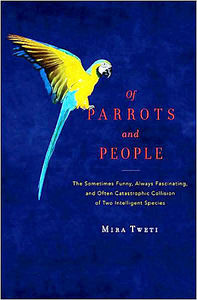 Mira Tweti heaps so much praise on parrots in “Of Parrots and People” that readers might want to bring one home. That’s exactly what she hopes to prevent.

Tweti reveals parrots to be human-like in their intelligence, vocabulary skills and social sensibilities – traits that have doomed them to cages for centuries.

But the praise is prelude to 300 pages of investigative journalism aimed at discouraging parrot ownership.

Tweti explains why life in a cage is particularly miserable for parrots. She documents the cruelty of breeding operations and follows firsthand the chain of parrot possession from jungle to living room. It’s not a pretty story.

Parrots, possibly descended from dinosaurs, have the intelligence of a 3- to 5-year-old human. They mate for life, grieve for lost flockmates, defend one another fiercely and bond strongly with humans.

Tweti introduces us to birds that use hundreds of words in their proper context. With focused training, parrots can learn to count, grasp such concepts as time and grammar and even dictate poetry.

All those brains and beauty besides: Who wouldn’t want one as a pet?

But parrots are loud, annoying, destructive and able to inflict painful bites. Rare is the person who will hang in there with a high-maintenance pet that might live for upwards of 65 years.

Tweti, who lives in Los Angeles, defines a good parrot home as one where the bird is free to fly and has such enrichments as daily baths, time outdoors, mental stimulation, nurturing and social interaction.

Such homes are rare, and when the honeymoon is over, parrots become hand-me-downs: Hidden in back rooms, closets or garages until a new owner is found. Neglected parrots can become psychotic and many resort to self-mutilation.

Tweti’s devotion to parrots was inspired by her “muse,” a green-naped lorikeet named Mango whose intelligence she began to appreciate after the bird apologized for biting her. The book, the product of five years of travel, research and writing, is dedicated to Mango, who died in 2006. Its pages are filled with villains, including trappers, smugglers, breeders, retailers and the owners of America’s millions of neglected birds.

The heroes are attentive parrot owners – “parronts” – and rescuers who devote their lives and homes to abandoned birds. Tweti visits several of the avian rescues that house unwanted birds brought to the U.S. during a 20-year boom that began in the 1970s (TV’s “Baretta” with his yellow-headed cockatoo, Fred, helped feed the frenzy).

The couple who run Foster Parrots in Boston keep 280 parrots in their house, yard and barn. Their lives are an endless cycle of cleaning, feeding and looking for placement homes.

At Lori Rutledge’s Cockatoo Rescue in Stanwood, Snohomish County, colonies of birds flock together in airy cages on 40 secluded acres.

On the flip side are the “bird mills” of breeders. Tweti visits Martha Scudder’s Parrot Depot near Roy, a “concentration camp for birds” that she exposed in a 2005 article in The News Tribune. Subsequent attempts to get birds added to a Pierce County ordinance regulating the humane treatment of animals failed. Scudder’s operation is one of 20 breeding operations in Washington.

Some of the happiest parrots are those who have escaped or been set free to flock together in friendly climates. California and Florida are home to thousands of parrots in a variety of species.

America’s only native parrot, the Carolina parakeet, became extinct long ago. With trapping and smuggling kept profitable by worldwide demand, the same fate threatens parrots all over the planet.

Only 10 percent of birds trapped in the wild live to see the inside of a cage. Replacing lost flock mates is a slow process for these long-lived birds.

Smuggling has exploded with innovation such as fertilized eggs, the Internet and global shipping services. The huge profits have attracted the likes of the Russian mafia. Tweti is critical of international agreements that she believes are tailored more toward business than conservation.

With a Spanish-speaking friend in tow, Tweti poses as an American bird buyer in Tijuana, Mexico, where roadside sellers tell her how easy it is to carry an illegal bird across the border. The intrepid Tweti peppers them with so many questions about their filthy cages that her interpreter worries for her safety.

She travels to South America to meet Charles Munn, an American who devotes his inheritance to saving the wild parrot. Since 1976 Munn’s nonprofit conservation organization, Tropical Nature, has secured millions of acres of habitat in Bolivia, Ecuador, Peru and Brazil, where rain forest is sacrificed on the altar of agribusiness at the rate of a football field every second.

Munn’s strategy is to convert trappers to a more sustainable enterprise: eco-tourism. It works, but acquiring habitat before it goes under the plow is tricky and costly. Tweti follows Munn deep into the Brazilian jungle to see the endangered hyacinth macaw, the largest of parrots (3 feet from head to tail). In an area where Munn is buying up land, 50 birds sc*censored* out a living finding piacava nuts on 1,000 acres.

Tweti’s Brazilian adventure continues in the Barreira Valley, one of the Lear macaw’s last strongholds. Led by a reformed ex-trapper, her group must avoid being followed by a man who recently stole six baby Lears from their nests. Only 600 remain in the wild.

Her journey continues at the zoo in Sao Paulo, where seven Spix’s macaws, possibly the rarest bird in the world, are in maximum security, protected by guards. They are extinct in the wild, and the zoo’s captive breeding program is their only hope of survival.

Zoo officials appreciate Tweti as a true friend to parrots and grant her a rare visit to the Spix’s. Her English evokes a happy response from Presley, a male Spix’s rescued after 25 years in a Colorado living room. It is one of many intensely personal experiences Tweti shares in a book best described as a labor of love. The final chapter is a scary vision of Earth’s future if changes aren’t made in humankind’s relationship with Mother Earth.

Save the parrot, save the world? It isn’t that simple, but keeping parrots alive in their native habitat would be a good start.

If a creature that thrived for 65 million years can vanish from the planet, then so can we.

Here, There and Everywhere: The Story of Sreeeeeeeet the Lorikeet