Home for parrots whose owners flew the coop

A sanctuary for unwanted parrots

(Boston Globe) Foster Parrots provides homes for birds that can no longer be taken care of by their owners. The birds are intelligent and social but become moreaggressive as they mature. By Joanne Rathe, Globe Staff / By Bina Venkataraman /Globe Correspondent / October 27, 2008

The shrieks of Moluccan cockatoos ricochet off the walls in a cacophonous roar, while parakeets clamor "Hello! Hello!" to one another. At the New England Exotic Wildlife Sanctuary, more than 300 parrots take ambient noise to new heights.

This is the first parrot sanctuary of its size and caliber in the country, said author Mira Tweti, who has studied the parrot trade for more than a decade. With aviaries that stretch more than 7,000 square feet, and an additional 5,000 square feet of flying space under construction, the sanctuary provides something that thousands of parrots lack: a permanent home.

Many of these former pet birds were shuffled from house to house for years before they landed here, and were adopted by Foster Parrots, a nonprofit group started by Marc Johnson, of Middleborough. The sanctuary lies on a 15-acre plot about 5 miles from the Connecticut border, in a single-story building that was once - oddly enough - the broiler house for a chicken farm. Since setting up shop in December, Johnson has been getting more and more calls from people hoping to unload their parrots.

Worldwide, wild parrot populations are on the decline. About one-third of the planet's parrot species are threatened or endangered, according to the World Parrot Trust, as their habitat shrinks because of deforestation. A thriving and lucrative black market trade in parrots, as well as legal capture for the pet industry, have also contributed to the decline of parrots in the wild.

Parrots that end up in the pet pipeline don't always prove to be ideal housemates.

It's not that they are not smart. "Parrots appear to have the same level of intelligence as apes and dolphins," says Irene Pepperberg, a professor in the psychology department at Brandeis University. She trained her well-known African Grey parrot, Alex, to speak more than 100 words and discern shapes and colors. Alex, who died in 2007, displayed intelligence comparable to a 5-year-old child, Pepperberg said, and could communicate like a 2-year-old.

But, by their nature, parrots are loud. In the wild, parrots' boisterous calls help them survive, whether warning their flock against predators across large distances or trying to attract a mate. In a house, the racket can be more than irksome, and perhaps not such a great survival strategy. They also rip to shreds the likes of family heirlooms and fine furniture. "People don't realize what they are getting themselves into," said Tweti.

Bird rescuers across the country take in parrots that owners give up on. Other parrots escape, or are shooed out of homes - forming wild flocks that in recent decades have taken roost around the United States, from Telegraph Hill in San Francisco to the ballfields of Brooklyn College.

"There's a revolving door when it comes to parrots, " said Tweti, who wrote "Of Parrots and People."

More than 11 million birds of all kinds were kept as pets in the United States as of 2007, according to the American Veterinary Medical Association. Experts do not know exactly what percentage of them end up in rescues, but Tweti's book documents several rescues that receive calls about more than a thousand unwanted parrots per year. 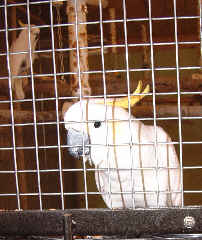 At the New England sanctuary, Johnson says that he gets between 20 and 30 calls each week. Some callers, he said, threaten to kill the birds if he will not take them.

Glassy-eyed, Johnson leans into a tattered couch that smells like a petting zoo. He has a fresh wound above his right eye left by a feisty, one-legged umbrella cockatoo named Shen Ming who attacked him earlier in the day. He hasn't taken a day off in more than three weeks. And - no surprise - he recently lost the ability to hear with his left ear.

"When you think about it, parrots have a built-in unwanted factor because they live so long," he said, adding that some macaws and cockatoos live up to 90 years.

Johnson stumbled into parrot-rescuing by accident 19 years ago while teaching ceramics classes in Cambridge. Just as he was buying his first parrot, a gold and blue macaw named Wally, the parrot-seller's neighbor ran over with a conure named Bill. "Wait! Will you take my bird too?" she asked. And he did.

Within a month, unhappy bird-owners started bringing their birds to him, and he couldn't refuse. He soon had 30 parrots living in his three-room apartment in Inman Square. He bought a barn in Rockland, but eventually acquired too many parrots for that space, too.

"They are wild animals, but we just don't see that when we see them at the pet shop," said Ann Snape, a resident of Hingham, Mass., who gave her Moluccan cockatoo of 21 years, Henry, and her sulfur-crested cockatoo of 18 years, Humphrey, to Foster Parrots last year, along with a hefty donation to pay for their "retirement."

The sanctuary relies almost entirely on volunteers, Johnson said, to care for what are now entire flocks of exotic birds. He now realizes that he cannot take in all the parrots that need homes.

"Most of the time, I have to say no," Johnson explains - but the end of his sentence is swallowed by a loud crash down the hall. Adam, a sulfur-crested cockatoo, is up to no good. Johnson races to fix the problem as another chaotic chorus breaks out in the aviaries. It's the kind of song that could deter even a bird-lover from buying a parrot.