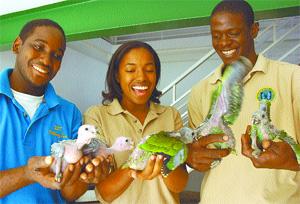 RECUPERATING: Zookeepers Arnold Jupiter, from left, Elena Hernandez and Christian Blake-Prescott with some of the parrot hatchlings which will eventually be returned to their natural habitat in the Nariva wetlands. -Photo: JERMAINE CRUICKSHANK

Zookeeper Arnold Jupiter, has gone so far as to keep the young birds at his home, since they need 24-hour care.

Just talking about the circumstances surrounding the chicks' arrival was enough to evoke anger among some of their human guardians.

The chicks were stolen from their nests by poachers who attacked during the day, while the adults were out foraging for food.

The birds nest in the hollows of palms found in the wetlands and were reached by felling the palms, a tactic that would undoubtedly have killed some of their siblings.

The chicks were rescued after the Wildlife and Forestry Division was alerted that they were being sold by a vendor at Chase Village, Chaguanas. The protected birds were confiscated by Game Warden Samsundar Ramdeen and taken to the Zoo for emergency care by his colleagues, Nicholas Leith and Dhaniram Ramlal.

A man arrested is expected to be charged soon.

Some of the birds are now about eight weeks old, while some are about two weeks out-making them almost freshly hatched when the poachers struck.

The former nesting site has since been located, showing the destruction of about eight nests.

"This is an established nesting site that has been destroyed," said an angry Zookeeper Walter Bonyun.

"Their parents will be traumatised. They will search for the chicks until they get tired and after that, they have to re-establish another nesting site. That was their nesting site, time and time again, where has it gone?"

Once they are mature enough, the birds will be rehabilitated before being returned to their natural habitat. They will first be kept in a closed cage located in the Nariva wetlands, where they will be fed native fruits and berries. Once the keepers are satisfied they have grown used to the area, the cage will be left open so that birds can emerge into the wild at their own pace.