Rare Kakapo to be Artificially Inseminated 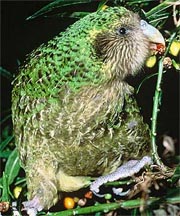 The first artificial insemination of a rare New Zealand bird is planned this summer in a bid to boost kakapo numbers.

Low population numbers have kept the critically endangered nocturnal parrot perilously close to extinction for the past 30 years, since a small breeding population was discovered on Stewart Island. All 86 kakapo, the world's heaviest parrot, known to exist live on offshore predator-free island sanctuaries in the South Island.

Kakapo recovery programme senior technical officer Daryl Eason said he turned to artificial insemination after the last breeding season two years ago was hampered by high levels of egg infertility. Only four kakapo chicks were born from 26 eggs laid on Whenua Hou (Codfish Island), near Stewart Island, and 60% of eggs laid were infertile.

"It wasn't too flash," Eason said.

Kakapo nest only every few years when enough fruit is on the trees.

Just as for humans, kakapo breeding with closely related mates risk genetic deformities, such as infertility. Eason said all but one kakapo, Fiordland kakapo Richard Henry, were from Stewart Island or were their offspring. Genes from Richard Henry were particularly precious in improving genetic diversity.

The team hoped to use sperm from him and his two male offspring for artificial insemination this summer. Richard Henry had also fathered a female kakapo 10 years ago, which reached breeding age this year.

Eason said male kakapo would start "booming", their deep mating call, in a few weeks but the first pairings were expected around late January, when artificial insemination trials would begin.

His studies also showed female kakapo mating more than once had a better chance of laying fertile eggs.

As a result, artificial insemination would be trialled on the first birds after they had mated naturally, topping them up with fresh sperm a few days later, he said.

"If we do artificial insemination and the females don't get put off nesting or laying, that's encouraging. We will keep a very close eye on them." If no problems resulted, the technique would be used on more female kakapo, he said.

All resulting chicks would be genetically tested for paternity "to see if what we did worked or not".

Last summer, international artificial insemination expert Juan Blanco, from Spain, came to New Zealand to teach the kakapo team how to massage male kakapo to extract sperm. They gained samples from 15 males and practised freezing and thawing it with good success, although studies showed the sperm had high levels of deformities.

Blanco is to return to New Zealand for a few weeks early next year, once breeding had begun, to assist with the first artificial insemination trials.

Programme scientists predicted more than half the 26 breeding-age female kakapo would lay this summer.

New supplementary food had been developed for adult kakapo, including for chick- rearing, which should lower the need to hand-rear chicks if the rimu tree fruit fails to ripen naturally. In 2005, all chicks were removed from their nests and handraised from a young age because the fruit failed to ripen and it was feared they would starve if their mothers were unable to find enough food to rear them.

Eason said it was not just about producing as many chicks as possible, but also about ensuring the best genetic diversity, which was vital for a species' survival. Felix, considered a "stud" kakapo, was retired to an island far from breeding females after 2002 because genetic studies showed he had fathered a third of all chicks produced since the programme's inception in 1980.