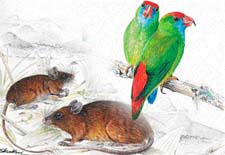 MANILA: A brightly plumaged parrot and a long-tailed forest mouse unique to the Philippines have been discovered in the vanishing rainforest of a tiny tropical island, US-based researchers said.


Camiguin, a volcanic island in the southern Philippines, is a treasure trove for fauna, and already had an endemic species of rodent and frog before the discovery of the rusty brown mouse and the green hanging parrot, known among locals as "Colasisi".

But Camiguin's wildlife was at risk from deforestation, researchers, writing in "Fieldiana: Zoology", a scientific journal published by the Chicago-based Field Museum of Natural History, warned.

"Knowing that at least 54 species of birds and at least 24 species of mammals live on Camiguin and that some of these animals are found nowhere else on earth, makes us realise how important this island is," said Lawrence Heaney, curator of mammals at the Field Museum.

"For these animals to survive, we've got to save the dwindling forests where they live."

A diverse archipelago of more than 7000 islands, the Philippines hosts a wealth of endemic flora and fauna but more than 70 per cent of its original forests have been destroyed.

Camiguin was once almost entirely covered by rain forest but by 2001, only 18 per cent was still forested due to logging, agriculture and human settlement. Half of the island, a popular diving destination, is covered with coconut plantations.

The new species of parrot was known to locals because of its value in the pet trade. The bird's throat and thighs are bright blue and the top of its head and tail are brilliant scarlet-orange.

Males and females have identical plumage, which is quite unusual in this group of parrot, and researchers gave it a new name – Loriculus camiguinensus or Camiguin hanging parrot.

Little is known about the new species, spurring interests in the scientific and conversation community to establish the size of its population.

The mouse, discovered high on the steep slopes of one of the island's volcanoes, was new to locals.

The rusty-brown rodent, known as Apomys camiguinensis, has large eyes and ears and feeds mostly on insects and seeds.