The plight of parrots 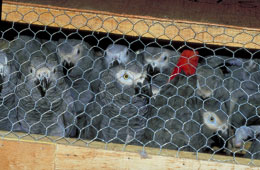 In the wild they fly many miles every day, spend a lot of time socializing, foraging for food, chewing wood and preening themselves. Parrots are as intelligent and sensitive as they are beautiful. But, as more and more end up in pet shops, the threats to them loom large.

Among the variety of wildlife species that enter the pet trade, highly sought after are members of a family that are being, virtually, loved to death. The parrot family.

From the smallest lovebirds to the largest macaws, huge numbers are captured from the wild and exported to markets to satisfy consumer demand for avian pets. The more exotic the better!

In the UAE too, parrots are reported from pet shops; and these are enthusiastically purchased by people. Only recently, a popular daily carried a feature in which owners of African grey parrots (a particular favourite that is an endangered species) raved about their pets, their intelligence and entertainment values.

Worldwide decline in wild populations
The high demand for pets is causing a dramatic decline in wild parrots worldwide. Habitat destruction is another factor responsible. The IUCN Red List of Threatened Species contains 94 parrot species that are considered vulnerable, endangered, or critically endangered with extinction.

That is why all species of parrot are protected under CITES (Convention on International Trade in Endangered Species of Wild Fauna and Flora) with the exception of grass parakeets and falcon parakeets. Consequently, it is illegal under international and local laws to buy or sell parrot species with out necessary permits.

Death during capture and transit
While much wildlife trade is legal and follows CITES regulations, there is a persistent illegal trade, particularly in wildlife such as rare parrots and other exotic birds. Each year, hundreds and thousands of parrots are imported and exported to supply the demand for pets. Often plucked from their nests and smuggled across borders, many do not make it to their destination because of inhumane conditions, dying of starvation or cruel treatment en route.

Some smugglers techniques are particularly cruel! Birds are taped to hubcaps, drugged, stuffed under clothing with beaks taped shut, and hidden in wooden crates in the midst of other cargo with improper ventilation; and certainly no cooling.

High mortality during trapping, shipping and quarantine means that trade impacts far more wild birds than the numbers that actually end up for sale.

Not such happy pets
Parrots have very intense social bonds in the wild. They are flock animals and survive by staying with their flock. These social needs remain even in captivity and they, therefore, require a lot of attention and stimulation. Many wild caught parrots retain their wild traits and may have been sold and resold to a number of owners.

Several that are now kept as pets, have not been domesticated through years of selective breeding but, instead, are only a generation or two removed from their wild ancestors.
Because parrots are thought to be sensitive, with a need for stability, they can have behavioural problems when not in an optimal environment (the wild). This may result in fear biting, screaming or even self mutilation such as picking out all their feathers.

Responsible consumers shouldn't buy wild-caught parrots and parakeets for private ownership. Buying these only encourages an illegal trade that is decimating parrot populations.