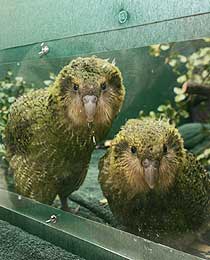 Nelson's rarest chicks have become awkward teenagers, and it won't be long before they are kicked out of home.

Four kakapo chicks are being handraised at a rented house in a secret location in Nelson [New Zealand]. Five were taken from their home near Stewart Island in April after failing to put on weight in the wild.

Department of Conservation kakapo technical officer Daryl Eason said although one had died the remaining chicks were thriving.

Mr Eason said the parrots, now boasting a lot of their adult plumage, had moved from a bedroom in the house to a pen in the basement.

The oldest chick was three months and the parrots loved living together, he said.

"They get quite playful, they jump on each other and play fight."

The chicks were clumsily developing their climbing skills on branches in their nest.

"They are excellent climbers in the wild. The mothers can be 20m up in the canopy (looking for food)."

The endangered parrots were hand fed four times a day and were also now eating fruit, vegetables and walnuts.

On June 20, the birds will be whisked back to their southern home on Codfish Island, and will be released back into the wild after two months.

Kakapo breed every two to five years and this year's brood brought the total population to 87.

Mr Eason said the birds had come to Nelson as it was a more convenient and cost-effective location for DOC than the likes of Fiordland, as a lot of the kakapo-raising team lived in the city.

The Nelson public will have the chance to see the birds before they head back to the wild.

DOC kakapo team scientist Dr Ron Moorhouse said the birds would be on display in Victory Room of the Trafalgar Centre between 9.30am to 4pm on Saturday June 18.

"They will be in a glass enclosure which will give them protection but also enable people to get a good look at them."

It was the first time kakapo chicks had been put on public view, he said.

A competition open to primary and secondary students to name the four chicks closed this week.

Kakapo team leader Paul Jansen said the winners would be announced in a fortnight.